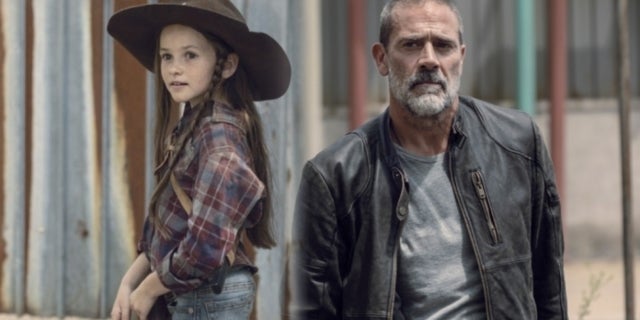 “Yes. I am hopeful because I believe in him,” Fleming said at Fan Fest New Jersey when asked if the ex-Savior leader will be a “good guy” in Season 10.

“In the season finale of Season 9, you can see all the different sides of him. And you can see how he has a special bond with Judith, and I think that’s gonna take him places in Season 10.”

Negan won the respect of Judith’s mother, Michonne (Danai Gurira), after he risked his life to save Judith from a ferocious blizzard in the Season 9 finale when the girl took off to find Daryl’s (Norman Reedus) pet Dog. Like her late older brother Carl (Chandler Riggs), Judith is a proponent for Negan’s growing redemption.

The season closer also saw Negan troll the Alexandrians when he ribbed Father Gabriel (Seth Gilliam) over his romantic entanglement with Rosita (Christian Serratos), who is pregnant with the child of Siddiq (Avi Nash). Negan has mellowed some following a near eight-year solitary prison term, but Kang says the once bat-swinging bad guy won’t lose his edge.

“Negan is Negan. As we’ve seen in the episode, he still has that part of him that likes to needle people, he’s always gonna have an edge, he’s never like a pure hero,” Kang said.

“In the episode you see that there’s been a little bit of change though when he’s locked up in that infirmary after [Rick had slashed his throat], that was one thing, and here he’s there. But if you’ll notice, he doesn’t have handcuffs on. And so that says a little bit about the change that’s happened in the community’s impression of him as a result of that.”