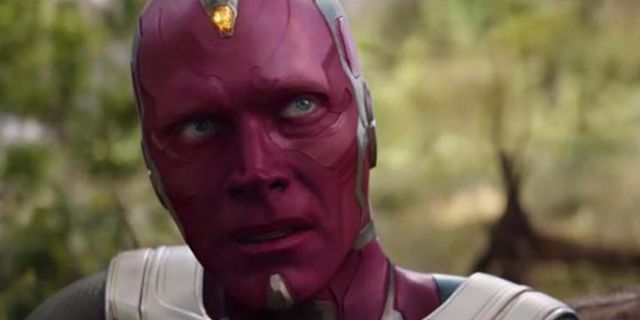 A lot of people asked for a Vision / Paul Bettany one on my post yesterday, so here’s an endgame style credit for him! from r/marvelstudios

After more than ten years and over 20 movies in the Marvel Cinematic Universe, Avengers: Endgame paid tribute to the actors and heroes who helped create the trend-setting film franchise. The credits sequence begins with an impressive showcase of the major players, though there is one notable absence you might have noticed.

After Vision‘s sacrifice in Avengers: Infinity War, he was one of the few characters who didn’t return in Avengers: Endgame. So one fan made sure to create a sequence paying tribute to Vision in the same style of the end credits for the Marvel crossover movie. Check it out in the video player above!

While Vision died, that doesn’t mean he’s not going to make a return to the screen. It’s already been revealed that Marvel Studios is planning new live-action series for Disney+ including a show called WandaVision, also featuring Scarlet Witch.

Actor Paul Bettany spoke about the new series after its official announcement, posting about WandaVision on Instagram.

“Soooooooooo… Turns out this is gonna happen with me and my ol Chum [Elizabeth Olsen] AND IT IS GONNA BE AMAZING!” the actor wrote on Instagram.

Feige added that the shows will include “things shockingly and unexpectedly that change those characters in big ways, so the next appearance on the big screen will be informed by what they’ve gone through in Disney+ series.”

He went on to tease what fans can expect when the shows premiere on the new streaming service.

“These shows will be on the same level of quality that you’ve come to expect from Marvel Studios, and we’ll be taking advantage of that creative freedom that Disney+ offers exploring the MCU, the Marvel Cinematic Universe, with our favorite characters over multiple episodes,” Feige said. “These will be both new and continuing stories, and one of the things we’re most excited about, is that these will be major storylines set in the MCU with ramifications that will be felt both through the other Disney+ series we’re producing and our features on the big screen.”

There’s no word yet on when WandaVision will debut on the Disney+ streaming service.