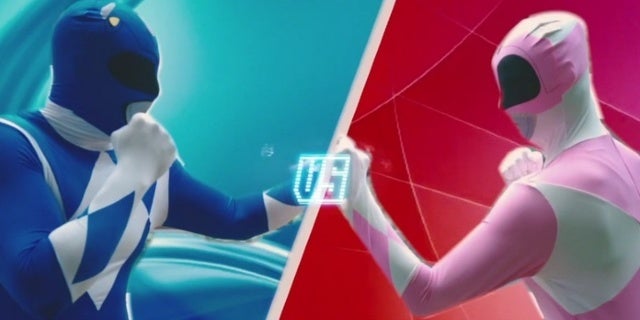 We’ve seen some creative gender reveals over the years, as parents are always trying to find new ways to share the big news, but Shay Mitchell‘s recent gender reveal might just be the only one to incorporate Power Rangers in quite this way. The Pretty Little Liars and You star recently shared a video on her YouTube channel that showed how the crazy Power Rangers gender reveal played out, and both her and her boyfriend Matte Babel were completely shocked at the eventual reveal and at what they were seeing, which was a Blue Ranger and a Pink Ranger duking it out at their house.

The Power Ranges gender reveal was set up by Shay’s assistant Liz, so neither Shay nor Matte knew what was coming, though they did know whatever it was had to do with the reveal of their baby’s gender. That’s why as you can see int he video, they were quite shocked when a Blue Ranger came out of the door, which Matte initially took to mean that they were having a boy.

A Pink Ranger eventually followed and the two started fighting down the stairs and in the grass as the couple watched. A series of punches and kicks followed, and they took that fight up on the wall next to the pool. This is where things got crazy, as they both plunged into the pool below, presumably to finish the throwdown, but then they ended up both surfacing from the water and pulling at their masks.

The costumes and masks were skintight, and since the masks cover the entire face, both of the Rangers started pulling at their masks to let oxygen in. They eventually both took them off in the water and continued the fight a bit longer. Eventually, the Pink Ranger got out of the pool and sat between Matte and Shay, revealing that they are in fact having a little girl.

You can find the description for the video below.

“Shay wanted to surprise Matte with a gender reveal that would keep him guessing, but it was a surprise for her too – so they left it up to Shay’s assistant Liz to do the planning. They saw a lot of gender reveals that involved pink and blue cake and balloons, but thought a touch of drama would really set this one apart from the rest…. So what do you think? Boy or girl??

This was definitely a memorable gender reveal, and you can watch the whole thing play out in the video above.