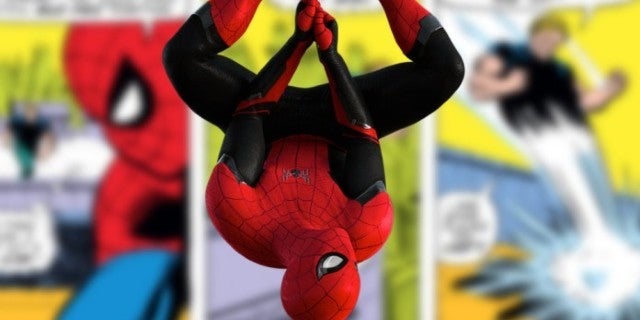 After arriving in Venice, Italy as the first stop on a class field trip across Europe, Peter Parker (Tom Holland) races into action to rescue civilians from an attacking water monster, which is ultimately stopped through the heroic efforts of flying superhero Mysterio (Jake Gyllenhaal).

In Marvel Comics lore, Bench was a cargo ship crewman who was accidentally knocked overboard by Spider-Man in the pages of The Amazing Spider-Man #212. Exposed to powerful energies released by an experimental generator being tested in the ocean, Bench was permanently mutated and transformed into “Hydro-Man,” now capable of exhibiting masterful control of his liquid body down to the molecular level.

Initially seeking revenge on the superhero, Bench became one of Spider-Man’s recurring foes when using his powers both for selfish gains and as a member of multiple supervillain teams, including the Sinister Six, the Frightful Four and the Masters of Evil.

Far From Home ultimately reveals the Marvel Cinematic Universe version of Hydro-Man isn’t Morris Bench but is instead an illusion crafted by Mysterio and a team of former Stark Industries employees scorned by their late boss, Tony Stark (Robert Downey Jr). Mysterio uses lifelike illusions realized through the use of drones wielding advanced projection technology, capable of wreaking real destruction thwarted by the “heroic” Mysterio, who looks to supplant Iron Man as the world’s most celebrated figure.

Another longtime Spider-Man foe, Molten Man, is similarly represented in Far From Home: here the villain is presented as a towering, lava-like creature instead of Mark Raxton, a scientist whose entire body is coated by a burning hot metal alloy.

“There’s this other subset of Spider-Man villains that are awesome, and we’d love to bring to the big screen, but it seems like maybe a whole movie about Hydro-Man might not be the way to go,” producer Eric Carroll previously told io9.

Added director Jon Watts, “I’ve always loved Hydro-Man and Molten Man and his ability to have a giant, elemental kind of creature for Spider-Man to fight against. Anything that makes things more difficult for him and opens up visual opportunities for me, I’ll run at bat.”