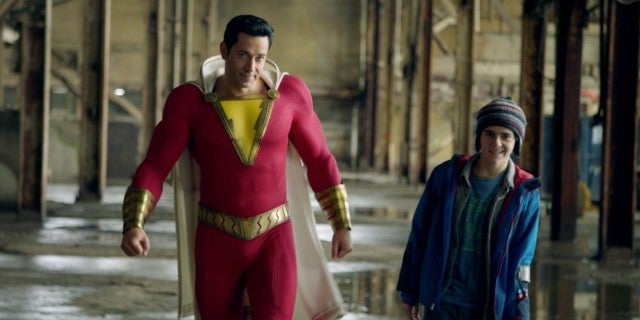 On the commentary track for Shazam!, available now if you buy a digital copy of the movie through Apple TV or iTunes, director David F. Sandberg talked about the unexpected appearance of the Ace Chemicals logo during a scene from Shazam!, and told fans that it is more than just a simple coincidence: in fact, the building where they filmed much of the “powers montage” in which Freddy and Billy test out Shazam’s powers is the same one that served as Ace Chemicals in Suicide Squad.

The empty warehouse is actually the Hearn Generating Station, a decommissioned electrical generating station outside of Toronto. As Sandberg notes in the commentary track, a lot of different movies shoot there when they need a setting that looks post-apocalyptic or damaged. He named off a few, including a 9/11 movie in which the Hearn Generating Station stood in for the fallen Twin Towers of the World Trade Center. And, yes, this Ace Chemicals warehouse is the same one from Harley Quinn’s origin in Suicide Squad.

“Suicide Squad shot here, as well. This is where Ace Chemicals was,” Sandberg tells the listener during the montage. A minute later, he added, “You can see Ace Chemicals in the background. That’s a little Easter egg.”

It is not immediately clear whether the Ace Chemicals logo was left over from the Suicide Squad shoot or whether they added it back in as a gag. The latter seems likely since, as Sandberg points out, there are a number of other productions that use the facility and it would be difficult to imagine nobody painting over it between when Suicide Squad was filming and when Shazam! was. Still, it’s a fun little nod not just to the DC Universe but to the set’s own history.

Harley Quinn wasn’t alone, either; in the commentary track, Sandberg gave his most clear explanation yet as to how and why the Superman cameo played out the way it did in the movie’s final seconds.

“In the script, we had a little scene with Superman — but we only had a very narrow window to shoot this scene in the school, so we tried to make it work with Henry Cavill but schedules did not align,” Sandberg admitted. “I was like, ‘what do we do now? We need an ending to our movie,’ So we actually shot al little alternative ending in case we were going to use that where the kids see a hostage situation on TV and they just go out and fly off to deal with that, but it was like, ‘we don’t get the payoff with Shazam’s going to show up at school.’ So we did this thing with our Shazam stunt double in a Superman suit and we just cut out before you see his head. And it worked really well. I thought it was really funny. At first I was like, ‘This is never going to work, this is going to feel cheap,’ but cutting out on Freddy’s reaction like that, I think is better than what we had originally planned. Originally Superman is supposed to sit down, talk to the kids, Freddy was going to be like ‘I have so many questions,’ and then we were going to cut out, but this sudden cut to the credits just works so much better.”