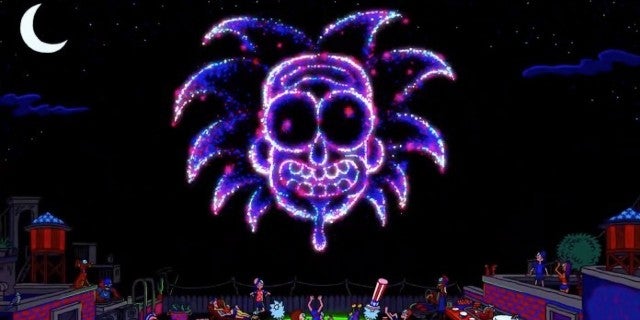 Check out Rick and Morty‘s July 4th tribute video, below:

While the video definitely play in the wild style of animation you’d find in an old Rob Zombie video, it’s actually packed with some interesting Easter eggs. First and foremost, the series villain, Evil Morty, shows up on a beer can with the presidential seal on it – a nice callback to Evil Morty’s rise to power in the Citadel of Ricks in season 3. The beer foam version of Rick that pops out of the can is a nice homage to toxic Rick; Pickle Rick gets a makover as “Hot Dog Rick”; while the final shot of the piece is like a Where’s Waldo page of funny little characters packed into the image.

While it’s not mentioned directly here, this little July 4th tribute from Rick and Morty is also a nice little reminding teaser that Rick and Morty season 4 is on the horizon. The fourth season already has a November release date, which will be just the beginning of a 70-episode commitment that Adult Swim has made to the series, after some high-profile tensions with Rick and Morty creators Justin Roiland and Dan Harmon, following the breakout success of season 3. In fact, this is what Roiland has had to say about the future of the series, now that the road forward has been thoroughly paved (with money):

“We‘re super excited that, for the first time ever, we’re locked in, we know what the future is, we have job security. [Co-creator Dan] Harmon is in great spirits, we have a great writer’s room. We want the episodes to stay good, but we do also want to try to turn them around a little quicker now that we have this big order, I think it gives us the ability to be faster. We’re not going to do these long breaks, these chasms in between seasons anymore. We’re going to schedule vacation time and just keep the machine going. It’s going to be really cool.”

Rick and Morty returns to Adult Swim in November, with a sneak peek screening earlier in the month. The first three seasons of Rick and Morty and available on Hulu and On Demand.