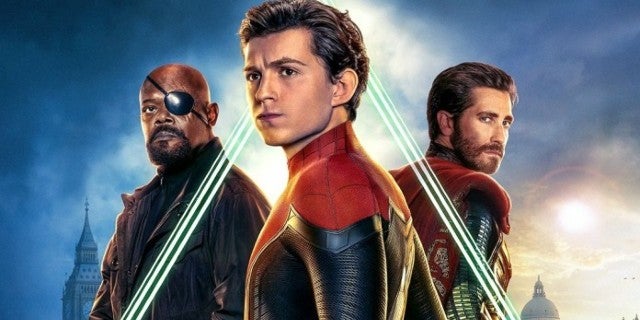 Yesterday saw the long-awaited release of Spider-Man: Far From Home, the first Marvel Cinematic Universe film in a post-Avengers: Endgame world. The film’s cast have been busy promoting the movie, and a recent interview with Tom Holland (Peter Parker/Spider-Man), Jacob Batalon (Ned Leeds), and Zendaya (MJ) saw the stars making fun of one of the film’s posters.

“You know, it doesn’t,” Holland replied. “That poster makes me so upset. That’s probably Tobey Maguire’s body on my head. It’s not even my body! I don’t know why they did that.”

Holland isn’t the only person who has qualms with the new movie’s posters. Fans weren’t too impressed with some of the recent designs, mocking them to the point of going viral. This led to an array of hilarious fake posters that were made by fans, which you can check out here.

“Peter Parker returns in Spider-Man: Far From Home, the next chapter of the Spider-Man: Homecoming series! Our friendly neighborhood Super Hero decides to join his best friends Ned, MJ, and the rest of the gang on a European vacation. However, Peter’s plan to leave super heroics behind for a few weeks are quickly scrapped when he begrudgingly agrees to help Nick Fury uncover the mystery of several elemental creature attacks, creating havoc across the continent!”

Spider-Man Far From Home is now playing in theaters everywhere. Other 2019 Marvel Cinematic Universe films include Avengers: Endgame, which was just re-released in theaters, and Captain Marvel, which is now available on DVD and Blu-ray.